Marital infidelity is specific to a violation of the marital vows exchanged between a married couple and marriage is a contract whether or not you pledged to be faithful in a religious or civil ceremony. The terms of the contract most often are determined by the resident state legislature, and cheating on your spouse is a violation of that contract and leaves the joy and love shared on your wedding day a distant memory. 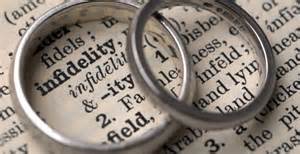 Unlike a business contract, powerful emotions including frustration, betrayal and shame often overwhelm the wounded spouse. Frequently, guilt and shame wash over the cheater, as with the exception of the chronic cheater or adulterer, few marry with the intent of being unfaithful.

Some sources allege that marital infidelity occurs in 50% of all marriages and men are more likely to have cheated in the past but women appear to be catching up. Dr. John Grohol, a Psychology professor, believes those numbers are inflated and actually, the risk of your spouse cheating is about 6% in a given year and 25% over the course of a long-term relationship.

The wide discrepancy is because the data is what people report and the same people report different numbers when giving face to face interviews or privately filling out questionnaires.

Causes of Infidelity in Marriage

Day to day living facing the challenges of careers and children's needs is one of the reasons that married couples start to move apart. Social researchers have found that poor communication between couple is often both a cause and consequence of cheating.

Sometimes boredom is a cause and an extra marital affair offers excitement and brings back passion for life and if you are looking to cheat you can find a reason such as:

When an opportunity presents itself for cheating, you will be able to find multiple ways of rationalizing infidelity but the reasons for not going forward are basically your moral code and the love and trust of your partner.

Although you can save a marriage when one or both partners have had an extramarital affair, the best course for your marriage is to prevent marital infidelity. Paying attention to each other needs, making time for each other and showing appreciation for your partner all work towards building a stronger relationship.

If your relationship remains strong, you and your spouse will not only not be tempted to pursue someone else but you also will be able to resist temptation.

When one or both partners commit marital infidelity, you can save the marriage if both want to repair the damage. Infidelity violates the very foundation of marriage so it will take a lot of effort to fix it, and some times it is necessary to walk away. It takes forgiveness on both sides, honesty, and responsibility for the choices made, but if the love that was there on your wedding day, it might be worth the effort to build a solid marriage.

More Information About Types of Infidelity